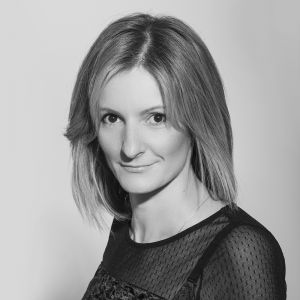 A Master in hairdressing, Hair & Beauty ROMAN team member and instructor in Le Monde de Laetitia Guenaou. Her sign is some extraordinary creativity. She gained her knowledge and brushed her skills under the best hairstylists and coiffure creators, such as Adelajda Tatomir-Dyras, Jacek Tatomir, Laetitia Gueanou or Chistophe Gaillet. She has also participated in numerous, prestigious internships abroad – Alexander de Paris, Aldo Coppola, as well as in Poland – L’Oreal Academy, Saks Academy, Balmain Hair, and Bertram Kainzer. Her achievements include a victory in the first edition of an international competition Haute Coiffure Française – HCF Trophy and the 1st prize won in the second edition of this competition in Poland. She also had the honour of being a member of the jury in the Polish edition of the Color Trophy. On numerous occasions she performed on great hairdressing and fashion shows, she also took part in a number of photo shoots as a stylist. Agata is an optimist, determined to practice a healthy lifestyle and maintain balance in her life. Yoga and travels – her second greatest passion, just after hairstyling – comein handy. One of our most experienced hairdressers, a Master in hairdressing, specialist in colouring techniques. Bringing out natural beauty is her passion. She treats colouring as art and a subtle improvement of nature. She decided to learn from one of the world-leading colourists – Jo Hanford, who monitored her training ‘Perfect Colour’. Always eager to deepen her knowledge in this area, she caught interest in colonoscopies, which is interpreting auto portraits based on the colour pallet. She participated in the introduction of the L’Oreal Professionnel brand to the Polish market by taking part in numerous shows and internships organised and conducted by Adelajda Tatomir and Jacques Alexandre. She likes the sea and its murmur, which makes her feel relaxed. Why? Because, as she puts it, it is a totally different frequency of noise than a hairdryer’s noise. She loves warmth and Mediterranean countries, their inhabitants’ temper and their cuisine. 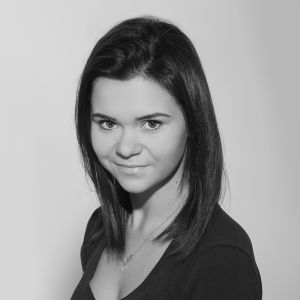 Angelika has chosen the hairstylist profession because she loves being around people. She enjoys talking to them, spreading smiles and joy. After a 3-year internship in Roman Hair & Beauty, she passed the examination at Chamber of Crafts with honours, thanks to which she was able to join the permanent hairdressers’ team of our salon. In her everyday work Angelika most enjoys performing the men’s haircut and bringing out the natural hair beauty with professional haircare treatments. She specialises in colouring, baleyage and highlights techniques. In her free time Angelika loves travelling and exploring new places. 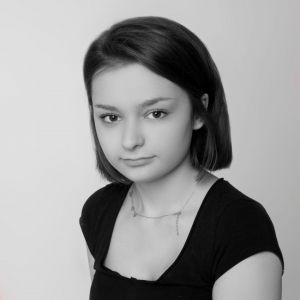 Hairstyling devotee who loves being among people. A smile of a happy customer is the best possible reward for her everyday work. It boosts energy and inspires creativity – one of Anna’s biggest strengths. Before she became a professional hairdresser, Anna completed a three-year training in Roman Hair & Beauty. Her talent and skills allowed her to become a member of our team. Her favourite “special missions” are colouring, hairdos and care treatments. In her free time Anna loves travelling and horse riding. She is one of the most experienced hairdressers. It is in our salon that she found her hairdressing place – she is happy, being able to fulfil her dreams and realise her greatest passion. For many years she worked with Ada Tautomer and Jacek Aleksander Tatomir as an instructor, taking part in numerous shows and trainings. It was a time, when the L’Oréal Professionnel brand appeared on the Polish market. Regardless of her several year-long experience, Beata keeps on improving her skills. She participates in trainings regularly, and her mentor is now Laetitia Guenaou, L’Oréal Professionnel ambassador. For the whole team, Beat is a huge authority. She’s a specialist, filled with passion, providing top-quality work. She loves making people feel good about themselves. Thanks to her work, as well as individual approach to every client, she makes them feel not only beautiful, but also exceptional. She likes resting in her garden, reading a good book and listening to birds singing. She has been interested in the art of hairdressing since she was a child­ – she used to cut her sisters’, grandmother’s and father’s hair. What she likes most at present is diagnosing hair and head skin. She specialises in selecting appropriate care treatments and products. Her knowledge in this area has been proven by credit given to her on the third stage of the Kérastase Knowledge Competition. In the future, Edyta would like to concentrate on advanced haircutting techniques. She is fascinated by creation – preparing evening hairdos and updos. Just as her colleagues, she wishes to present her work on stage and take part in professional competitions. Edyta works swiftly and fast, and everything that comes out of her hands is flawless. Her everyday hobbies are cooking and baking. Swimming is what makes her relaxed and puts her in a good mood. 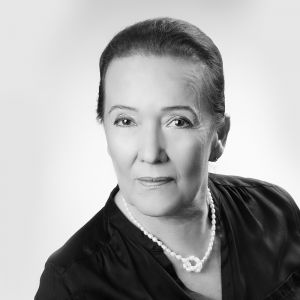 A Master in hairdressing, the most experienced member of our team. Elżbieta is for us a hairdressing authority – we have admired her artistry for years now and drawn on her rich experience. She is a master of haircutting and buns, Hairstyling is her life-passion and, as she witnesses herself, she cannot imagine a differentlife path. Her work brings her the feeling of fulfilment and a chance to develop constantly. Once she used to style mothers, now she styles their daughters, which is a great satisfaction for her. 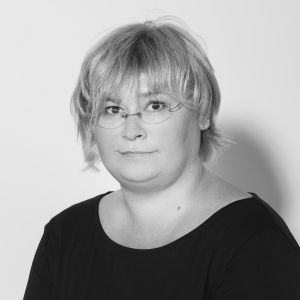 A Master in hairdressing, one of the most experienced hairdressers in our team. As she puts it herself, she got the ‘old school’. This is why she can pride in exceptional knowledge and hairdressing skills. In the Nineties, together with her masters – Adelaide Tatomir-Dyras and Jacek Tatomir – she took part in trainings whose aim was to introduce professional hair care products of the L’Oreal Professionnel brand. She values much the knowledge she gained at the beginning of her career and at the same time she tries to be up to date with all the recent trends, which is proven by her last visit to Salon International in London. Ewa adores her job because it is never monotonous for one thing. Every client is different, trends, techniques and products change. Apart from hairstyling, she loves nature and all its reflections – this is why she likes natural colours. Her passion is Nordic walking and in her leisure time she cherishes calm and peace. She relaxes by reading detective novels and romances, listening to music, going to the theatre and travelling. 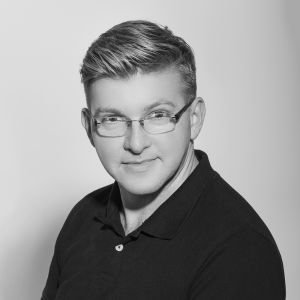 He began his adventure with hairstyling at Hair & Body ROMAN under Adelajda Tatomir-Dyras. He gained his knowledge and brushed his skills under the world-class hairstylists: Laetitia Gueanou, Jacques Alexandre and Christophe Gaillet. He specializes in unusual colourings, which he derives inspiration for from his travels around the world and the most recent world collections. He is incredibly creative and his work is his real passion. He simply loves what he does. He is a prize-winner in a prestigious competition, Colour Trophy 2008. He also participated as a hairdresser in the Miss World pageant. In 2011 he completed his Master’s in hairdressing. 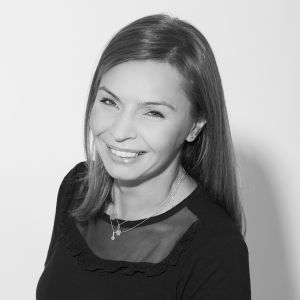 She has dreamt about being a hairdresser since ‘always’, but she started her professional career on a totally different path. It was only Ada Tatomir, who drew Marta towards hairstyling, seeing her great potential and the fact that she did not feel accomplished in her previous job. Marta knows now that she made the right decision – she loves being a hairdresser and she learns from her colleagueswith amazement, gaining subsequent skills and valuable experience. As she puts it herself, she loves what she does and she knows that she has found her place on Earth. 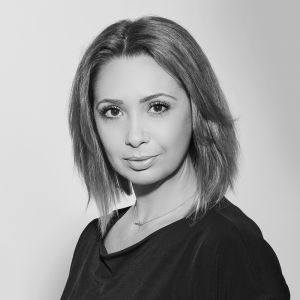 Licensed cosmotologist. She has worked in Hair & Beauty ROMAN for 8 years and became our Team Lead of cosmetology department. She has been fascinated by cosmetology from the earliest years of her life. Now it's both her profession and passion. She specialises in face treatments, hair removal, manicure and pedicure. Nothing makes her more happy than a true satisfaction of her clients. She is known for perfect diagnosing and great treatment recommendations. Her favourite hoobies are skiing, swimming and hiking. 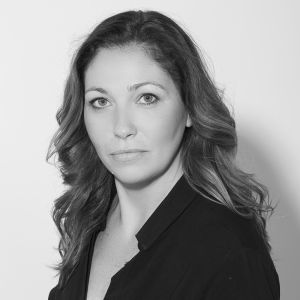 Make-up artist and stylist with 12 years of experience. Beauty expert, make-up trainer, instructor in one of the schools of image and styling, artistic director of Graftobian Poland. Urszula has taken part in commercial productions, ad campaigns, photo and video clip sessions, shows, artistic and corporate events. On a daily basis she dedicates most of her time for her individual clients, preparing day, evening and wedding make-ups – her specialty. 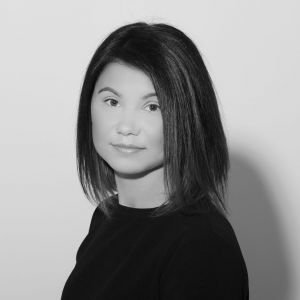 Anna loves working with people – she is at her best when in direct contact with others. Her creative mind challenges her everyday with new goals which allows her to constantly develop in the field. She is an optimistic person with a positive attitude toward people and the reality. In her free time she enjoys chatting and cooking with her friends. She is passionate about extreme sports and sees them as a chance to live unforgettable adventures. 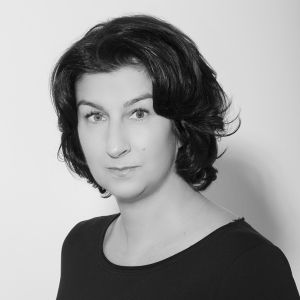 A great organiser and eternal optimist, stoically calm even during the worst troubles. Smiling, dynamic, reliable – the right person in the right spot. 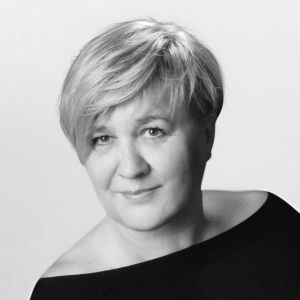 The owner of Hair & Body ROMAN since 1977. She is a granddaughter of Roman Tomasz Tatomir, who established the salon and passed her on the enthusiasm, fascination and love for hairdressing. In the Seventies, Adelajda went to Paris in order to gain skills under great French masters. She had the opportunity there to participate inL'Oréal and Haute Coiffure Française shows. She came back to the country with a mission of changing the quality of hairdressing in Poland and improving the image of the hairdressing profession – it is a task that she has been carrying out already for the second decade. Her passion is so big that she wishes to pass it on to others, which is reflected by a considerable number of her apprentices. When creating the present image of Hair & Body ROMAN, she ingrained a bit of Paris in it – so that the clients who come here feel exceptionally. This is her philosophy of perceiving clients – every one of them is a unique personality. Adelajda is a dreamer and creator, and her ideas quickly become actions. A great example here is, among others, the creation of Atelie de Precision together with Laetitia Guenaou, L'Oréal Professionnel ambassador, whom she came to know in the Eighties, during one of the shows of the afore-mentioned brand. By creating Atelie, they both wanted to show to others that hairdressing is not only a craft, but also a vocation and even art. Based on this idea, a few years later – in November 2011 – Le Monde de Laetitia Guenaou came to light. It isan association of hairdressing salons and hairdressers themselves for whom hairstyling is a constant artistic challenge and a chance to develop crafting skills by means ofself-development. Adelajda is a smiling optimist on everyday basis, who believes that nothing happens without a cause. Intuition, charisma and love to the world are her most valuable characteristics.